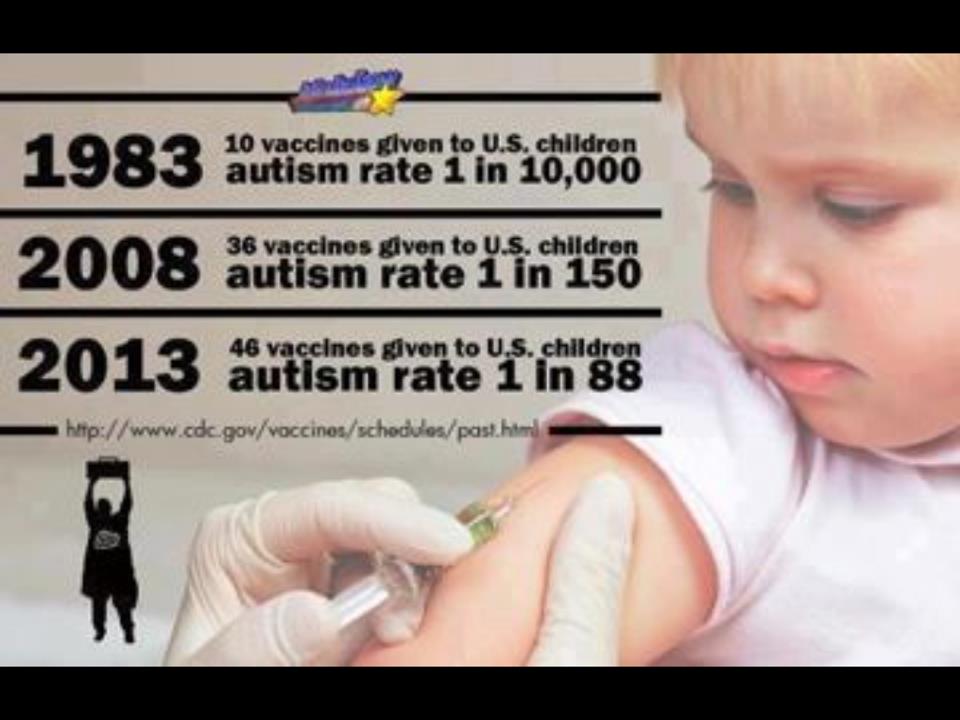 I had been invited to a holiday party and spent a heart-crusher afternoon interacting with an autistic boy. His movements jerky and robotic, he set a chair wildly rocking. I waited till it slowed and leaned my hand on the seat to get it moving again.

He avoided eye contact but his face lit up. He rocked it again; I did it again. A human interaction of a kind. When he realized I'd play, his motions grew less frantic and we took turns rocking the empty chair.

I was careful not to touch his hand; he was touch-averse and had to be restrained if sent into panic. He was unable to feed himself or be fed to any consistent nutrition and so was fed some slurry through a tube into his stomach.

I asked the mother of the autistic boy if he'd gotten all his mandated shots. She fluffed up like an indignant hen. "We do everything the pediatrician tells us."

"Of course", I answered, "you're a good mother." And she was, doing everything by the book and trying to stay sane in a madhouse.

"Did your son seem more settled when he was little?" Her eyes clouded and shifted; she didn't answer.

"After he started getting his shots and boosters, did he do alright? Did you notice any change in his awareness or behavior?" She shouted at me.

"NO! It just happened; no one knows how."

Since that holiday celebration, the boy's condition has haunted me.

Pharmaceutical companies have successfully lobbied the US Congress for protection--from irate and litigious parents who allege vaccine harm.

It can be sobering to ponder co-inky-dinks.

A particularly delightful grandchild has been born to friends, bright-eyed, robust and likely of high IQ; the parents are.

The pregnancy proceeded with exquisite care and nutrition, sans AgBiz poisons and GMO's. Yet I fear for the child. One of the parents is in the medical field and may go by the CDC book.

The CDC continues to recommend this year's toxic flu shot after admitting that it doesn't work. Stockpiles to use up, perhaps.

“If an individual has had 5 consecutive flu shots between 1970 – 1980 (the years of the study) his / her chance of developing Alzheimer’s Disease is 10 times greater than if they had one, two or no shots.”   When asked why this is, Dr. Fudenberg stated that, “It is due to the mercury and aluminum buildup that is in every flu shot. The gradual mercury and aluminum buildup in the brain causes cognitive dysfunction.”

We live in peculiar times when regulatory agencies and governments seem to have devoted themselves to the financial health of corporations, not the Public Health of the Commons.

If sociopaths in power dictate policy, sycophants will implement, and whistle blowers risk being destroyed.

How could this ever have happened, in a Constitutional Republic? Many effluent streams have led to strange agendas and laws. For example:

Toward the end of WWII, already-rogue "intelligence" operatives secretly brought Nazis into the US under "Operation Paperclip", and against the wishes of FDR and Truman.

As fantastical economic and imperial intrigues implode, hubris will reach its "Wile E. Coyote" moment. The cliff's edge gives way and with it, the social safety net of Big Brother.

Joseph's dream warned Pharaoh to store food for the lean years. The US has stored hollow-point bullets and turned law enforcement into Darth Vader brutality.

But communities, and youth robbed of jobs by corporate off-shoring, may differ.

In Hurricane Sandy response-ineptitude, it was the Occupy-Everything youth who mobilized, organized and net-worked to get food and help to the traumatized and elderly.

At the Bundy Ranch standoff, cowboy neighbors and oath-keepers showed up on horseback and faced down a Federal greed-grab.


A Children's Book
by your f&f author


http://tinyurl.com/jeremiah-jay
A story about being bullied, for being different. The fourth Wayfaring Traveler book; color illustrations by Wayfarer's mother.
Posted by Yeoman Gardener at 9:31 AM