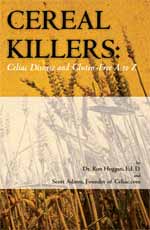 Gluten-intolerance is rarely diagnosed; instead wide-ranging symptoms are treated. The symptoms are in fact a medical cash cow.

Suspecting you might be gluten-intolerant can feel like a sucker-punch to the gut, with a big lifestyle change waiting in the wings. The good news being, that good health can follow.

Enter Monsanto, Syngenta et al, and their added challenge to healthy choices, thanks to effective slush-lobbying in Washington. Still do-able, however, but it takes paying attention.

Biotech has created GMO foodstuffs so insane and herbicides so toxic that:
http://sustainablepulse.com/2014/02/19/roundup-linked-global-boom-celiac-disease-gluten-intolerance/#.UwzQpIUhtcp

A grain-based allergy-inducer and auto-immune-nightmare---caused by eating/drinking foods made from:

Wheat, barley, rye, spelt, kamut, triticale. Oats may or may not be tolerated.

(Oats are generally not tolerated, though an effort is being made to produce oats organically, and without any contamination by wheat in the planting fields, silos, and milling facilities.)

Other grains can be deliciously substituted; gluten-free foods are increasingly available.


Gluten-Intolerance is Becoming More Common. Why?

Posted by Yeoman Gardener at 12:36 PM