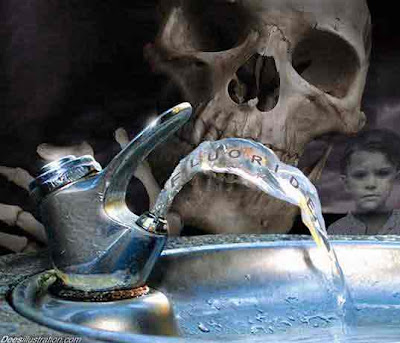 
Part One: You’ve got to be kidding

Here’s a question for you -- What sane person would rename a rat poison as a health-product, and add it to drinking water, diet sweetener, infant formula, toothpaste, and Prozac?

Nazi (hereafter referred to as Nutsi) scientists came up with the fluoride-in-water idea. Why on earth? Or rather, where on earth?

Concentration camps, is where.

The rat poison, fluoride, affects the brain and pineal gland; it makes the thyroid sluggish; it makes inmates sluggish, docile, and controllable.

Nutsis introduced fluoride into municipal water of occupied territories, and crushed and plundered Europe with the mad dream of an elite Pan-Germany with dominion uber alles (conquering all.)

Stalin got hold of this IG Farben discovery, of messing with will and brain function. Soviet gulags soon featured fluoridated water to keep the inmates mind-numbed, slogging, and making no waves.

The really obnoxious dissidents were declared insane, and drugged out of their minds in asylums. (Fluoride is in many prescription drugs and anesthesia, btw, caveat emptor.)

The Nuremberg Trials showcased Nutsis, and the US government—recognizing expertise—imported them. In an op, called Operation Paperclip, Nutsis were brought into military, intelligence services, and industry.

So? Move along, nothing happening here…

It would cost gazillions to dispose of toxic fluoride waste. Why not, instead, sell smokestack scrubbings, as a beneficial product, at huge profit?

The lobby-controlled US government mandated water-fluoridation as public policy. Think about that.

Such an alliance of corporations and government is called a fascist state.

When your head stops spinning, there’s good news tonight! Nations, communities and whistleblowers are changing the game plan, if plan there be.

Whole countries (EU) are changing their soundbites about "beneficial fluoride", and are removing it from the public water supply.

Don’t-confuse-me-with-the-facts had pretty much held sway, till these increasingly interesting times, given the history of corpgov pressure to implement fluoride policy.

Dis-info pieces by credible authorities implied that resistance to fluoridation was not only futile; ignore any evidence and resistance, as coming from the lunatic fringe.

Not just scientists, many folks, including us chicks, have refused to read the evidence of fluoride’s toxicity to brain, thyroid, bones, teeth (!), its links to cancer and infertility.

We have not wanted to consider power structure complicity, in its imposition of fluoridation upon civilian populations. See the following link for an eye-popping expose’ of the reach of industry, and the health outrages perpetrated: http://tuberose.com/Fluoride.html

The lockstep/goosestep is breaking stride. More insiders are embarrassed and fed up by toxic and faulty-science protocols –- as a side note, watch for whistle-blowers turning over the can o’ worms called chemtrails, which may have a fluoride connection: http://www.willthomasonline.net/willthomasonline/Chemtrails_Updates_June_2008.html


Meanwhile, here on earth, all life has its being nourished by water, which is increasingly polluted, rivers, ocean, and flowing into our homes. Corporate-dominated government apparently has latched onto a different bottom line than those who weigh the effect of decisions "unto seven generations."

As we come to grips with dead-end corporatist policy, our communities continue to ingest immune-weakening pollutants in drinking water: intentional fluoride and chemtrail fallout; careless radiation, pharmaceuticals and heavy metals. Let's first take care of our families with an effective water filter.  See banner above article for a high-end filter, and consider this latest on tap water:

Part Two: What to Do?
See Table of Contents under "Govt Run Amok."
Illustration: David Dees