Frankenfood
for Your Family
or Organic? 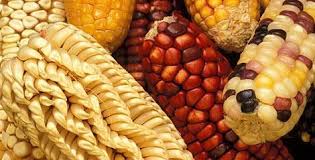 Sept. 14, 2014: Here's the scoop on "harmless" glyphosate (Roundup) health effects by an MIT professor. Glyphosate of GMO-infamy is also sprayed on conventional wheat, which is non-GMO, at harvest time. WHY? To increase seed yield and kill weeds.

Glyphosate is now linked to a sharp increase in celiac disease, cancers and autism.

She, the prof, offers some interesting points of global hope, including China, Russia and Moms of autistic children! Bottom line, eat organic, aka, Monsanto eat your heart out:


The Mayans have won!!

"Following the ban of GM maize in Mexico, this ancient and agriculturally savvy culture has won a major battle against biotech monopolies around the globe... Monsanto’s RoundUp Ready GMO soybeans, planted in the region – infecting more than 253,000 hectares with suicide seeds that cause human infertility and poison the environment... pointing out that increased use of herbicides and deforestation were both outcomes of GM planting..."


Oct. 11, 2013: Mexico is the cradle of heirloom maize/corn. A Mexican Judge has ruled "Imminent Danger" to that heritage: Monsanto and Pioneer must stop selling genetically-modified corn in Mexico. Sin Maíz, No Hay Paíz
http://www.foodfirst.org/en/GMO+corn+banned+in+Mexico

The disturbing images above, of grossly tumor-afflicted rats, burst upon the cyber scene from a 2012 French study. Rats were fed Monsanto GMO corn, Roundup-laced.

Mammary tumors, ladies and gents. A study, psst, not funded by Monsanto.

The rats lived in such agony that many were euthanized before the study ended. The repercussions on global consciousness are just beginning.

What can happen, if governments protect corporations instead of people? Well, corporate wealth, poor people-health, pollution... What else?

Government, supposed defender of the Tree of Life. can lose the trust of our planetary people. Complicit legislative, judicial and executive branches bend to a Tree of Death, letting land be poisoned and food be profitably deformed, unto the generations.

Sixty-four countries, so far, have banned GMO's or require labeling. Frankenfood is protected in the USA.

Biotech agriculture has managed to deplete and poison soil life of the Great Plains, once breadbasket to the world.

In the Punjab, breadbasket of India, generational farmers used to plant locally adapted, drought-resistant seed, and save part of the heirloom seed for next year's planting.

If the Nobel Peace Prize had not been awarded to Hiss-inger and Obomber, I'd cheer for Vandana Shiva, who cried Bullshit to biotech. (Bullshit, being a DVD.)

Farmers in India have watched touted GMO yields go down and crops fail, as debt destroyed family wealth. Trapped in the doom of having to buy GMO seed annually when facing foreclosure, farmers have committed suicide by the tens of thousands.

How? By drinking Monsanto agri-cides, alleged elixirs, which have killed their livelihoods. 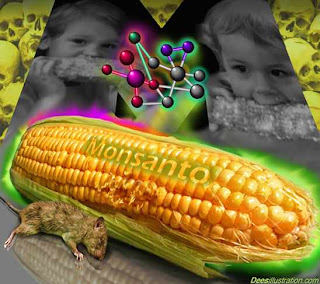 And GMO's remain unlabeled, thanks to millions of dollars in the right pockets!

This is no sci-fi flick; we're living it. It's corporate take-over of resources and regulations for its own depraved benefit. In Mussolini's time, a definition of fascism.

Roundup, the allegedly harmless herbicide of golf courses, suburban lawns and AgBiz monoculture, is now being studied, somewhat after the fact by decades. Roundup is being linked to Alzheimers, Parkinson's, autism, despair.

So--cancers, obesity, diabetes, heart disease, sexual dysfunction--get up and go; got up and gone.

Exhausted people grow disheartened, and may be more controllable in a control freak iteration of governance. Is that the final word of this story?

Perhaps not, though stolen elections and useless petitions may seem so. Can we still hope for "truth, justice and the American way?"

Putin promptly halted Russian import of what he termed, "American Cancer Corn" when he was informed of the French study of Monsanto corn-fed rats.

Next up, contaminated US wheat, contaminated from GMO-wheat held in storage by the USDA. Countries are refusing to buy. China recently destroyed US shipments of GMO-soy.

US GMO-rice we now learn has escaped captivity, from allegedly safe field trials, and has apparently contaminated the world's gene pool of even heirloom rice.

That's the import-export story and major hurt to AgBiz mega-monoculture of Monsanto grains and soybeans.

Meanwhile, Monsanto has bankrupted conventional and organic farmers through litigation, suing anyone whose farm has been contaminated by Monsanto GMO's. Patent infringement, don'tcha know.

Superweeds, courtesy of Roundup, are enriching chemical companies including the perp itself, with the prescription of ever-more toxic sprays. Soils are destroyed; crop yields go down.

Human, animal and plant toxicity of GMO's and Glyphosate (Roundup) is busting out all over. Bless the whistle blowers.

No bees and butterflies, and you get agricultural wasteland where blossoms don't set fruit. We go from bounty to chem lab land-blight. Another name for that is hunger.

And what do we make of the massive "Doomsday Seed Vault""  in the Norwegian Arctic, funded by movers and shakers of our current GMO planetary aberration? Hope in action may come from family farms still rich in heirloom seed, including native peoples in the ancient cradle of maize (corn) cultivation:

"Mexico could be Monsanto's Waterloo. Thousands of small farmers, many in indigenous communities—Nahuatl, Maya, Mixteco–are fighting back. Stubborn in the face of a government clearly allied with the transnationals and corporations determined to wear down their resistance, the farmers are defending their right to use the traditional maize seed that their ancestors developed over millennia. They are also defending their way of life and, ultimately, global access to safe and affordable food."
http://www.greenmedinfo.com/blog/monsanto-conquest-meets-aztec-resistance Meanwhile in the money-talks reality of Monsanto, US Congress and EPA, another you've-got-to-be-kidding corporate triumph has occurred. For goodness sake, how?

The Environmental Protection Agency, so-called, has been profitably infiltrated by Monsanto-collaborators.

And the latest toxic and "legal" jolt to planet and people?

Given grotesque levels of contamination by Monsanto of soil, water and GMO food being trucked to supermarkets, EPA has acknowledged the world according to Monsanto.

Not to worry; EPA has upped allowable food limits of glyphosate, the Roundup poison now proven horrific at ppt (parts/TRILLION.)


So? Note higher levels allowed in root crops. Say what? Ugly truth being that...

Root crops concentrate Ag-poisons, caveat emptor. If you buy only one thing organic, pretty good choice. I watched a documentary on GMO potatoes a couple years ago. An Idaho GMO-potato grower interviewed, applied all the AgBiz poison must-do's on big acreage, but wasn't about to feed the stuff to his family.

They had an organic garden.

A friend of mine during my own farm days ended up in the ER unconscious, and the ICU on life support. Fortunately her beau was a holistic MD  (and organic farmer.) He stormed in and diagnosed toxic exposure and mandated appropriate protocols.

When she returned to consciousness, she described having eaten a bowl of sweet potatoes and collapsing. The MD speculated that the sweet potato grower may have rinsed out his spray rig near those plants.

Not uncommon in Clueless, Inc. A dairy farm friend watched a guy on a tractor looking sly. She hid to see what he was up to--he emptied left over spray rig content into a trout stream, as more convenient.

How's your sense of humor?

In the midst of revelations of corporate malfeasance and global harm, the CEO of Monsanto was awarded a Nobel equivalent.

Wait for it... The World Food Prize!

So people on this earth, what can we do? 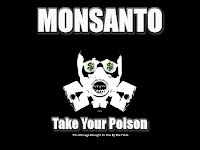 Begin at home and in community, not in government photo-ops. How about putting your money where your mouth is?

2) GMO's are not labeled thanks to big bucks, so what about a pro-active job description as GMO-sleuth on your own and your family's behalf? If run-amok corporations only respond to money, why feed the beast?

3) Plant a garden with heirloom, old-timey seed. Plant a tomato in a pot, kitchen herbs on a windowsill.

4) In our throw-away society, we've thrown away mentors. Mentors who could teach us how to be more self-sufficient, how to grow food, steward land even if it's a patio, and preserve food for winter and lean times. You may find a mentor at a farmers market, an old folks home, or a gardener who's willing to chat.