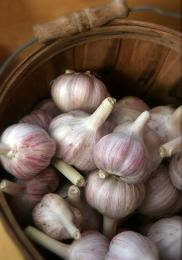 Only side-effect being garlic breath?

Actually, garlic eaten as infection-fighter and tonic immune-builder, is as old as pyramid building at Giza and the daily ration of Roman legionnaires. It’s way more interesting than just a frozen pizza option! Garlic heals, fortifies and builds strength.

The Mediterranean diet has since met the DAR, and we enjoy the gift of garlic-rich meals from Italy, France and the Middle East.

Given the pandemic buzz in our currently interesting times, has garlic deeper health potential?

Read on for in-house remedies* and elixirs.

(Yes, various capsules are currently available, but if not, what can be done at home?)

Interesting tidbit gleaned from the 19th century eclectic physicians about garlic and severe infections. This is pre-antibiotic info—an entire bulb of garlic was separated into garlic cloves, peeled, minced and mixed into lard. Lard was then readily available. Cold cream would serve as well.

The garlic remedy was then packed onto the soles (only) of the feet of a patient with high fever, flu, pneumonia, etc., the mixture covered, and held in place with socks. Within just a few moments the patient will have garlic on their breath.

The author observed this remedy put to use in a case of scarlet fever. Fever broke; the patient went into deep sleep and woke many hours later, smelly but well.

(This is mentioned as an anecdote, potentially worth noting if other help is not near, and should in no way be construed as medical advice.)

Plop above three ingredients into blender and liquefy. Pour into glass jar or two; cover with lids. Let age 5 days in fridge. Take 1Tbs daily in juice or water. An additional dose or two can be taken, in case of the “epizoodic”, as they say in the South.

This garlic elixir is potent stuff, and astonishingly is reported as having cleared up hacking “Chemtrail Cough”, dating from heavy spraying this summer. Suddenly, deep lung crud is brought up by the garlic tonic, and months-long coughing ends.

Whatever one’s opinion or observations of the skies, locally many of us have been watching unmarked white jets spewing out dense something or other.

The jets generally fly in teams of 4 or 5, making repeated parallel passes and X’s overhead. I have watched through binoculars as dense spew was emitted from the tail section, not the engines, of unmarked planes, perhaps setting the jet contrail-argument into question.

Before each torrential, crop-destroying summer rain this year, we watched the jets at play. Some spews rained down oily and caused circular smog “rainbows” around the sun.

After one such LA-sky blanketing, the rain puddles on our local organic farm had a reddish oily scum and the air stank oddly of chemicals.

Anomaly? Dunno, but in-home garlic has been a useful resource. It’s not too late to fall-plant in many parts of the country.

What to do about garlic breath?

2) In India, cardamom seed is often chewed after a garlicky, spicy meal. Good digestive as well.

There’s pretty interesting medical data on elderberry as an anti-viral. Expensive syrups and capsules are available from Switzerland and Israel. The brand names are some variation on the botanical name of the plant, Sambucus (canadensis).

What can we do at home, more economically?!!

A second, still yummy though weaker brew can be made when tea is drunk. Add another quart of water to plumped-up elderberries and ginger. Bring to boil; turn off and leave to steep. Nice to pour into a glass bottle and drink while out doing errands or at the office.

*The organic ingredients for the remedies can probably be found at your local health food store or food co-op. Being service-oriented, the store managers will likely be willing to order in product which represents a community good.

June 2013: Am updating the elderberry info with a recipe I like even better, concocted by True Earth Mama. Kudos to her! Given honey component, it's suitable for kids one year old and above, and yummy for adults as well. Here goes:

1. Pour water into saucepan and add all ingredients except for honey
2. Bring to Boil, Cover and Simmer for 45 minutes
3. Remove from heat, let cool
4. Pour through a strainer
5. When completely cool, add honey and mix completely
6. Store in a glass jar in the refrigerator

Take daily for immune support:
~ 1 tsp. for children
~ 1 T. for adults
If Flu comes on:
~ Take suggested dose every 2-3 hours until symptoms disappear.

Elderberries: High levels of Vitamin A, B and C, high in antioxidants, immune system stimulate, helps with digestive system, anti-inflammatory.