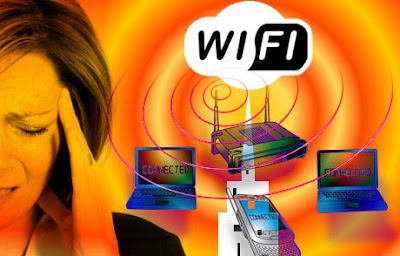 A Wi-Fi in Every Pot

Update:
7 July 2014
Thanks to George Ure for linking this alert by a retired military microwave-radiation specialist and whistle-blower:“What’s with the story over on Before It’s News about how Wifi could kill millions of people?”

A hard-times politician back in the Great Depression electioneered with the slogan, "A chicken in every pot!"

Somehow in this strange economy, food may get scarce, but we've got Wi-Fi stuffed everywhere. Just try to find a hotel, library, public building or condo without it.

It happened quickly, and we haven't much of a clue about whether it was a human-friendly idea. It's a hot potato topic in EU, where the imposition of Wi-Fi is being fought.

On a smaller scale, here's a Wi-Fi story from Maine, and maybe what this all may mean on planet earth:

After long New England winter of snowshoes and crampons, daffodils are in bloom!

That's not all that's popping up. Even in the back of the beyond, Wi-Fi has become the must-have du jour.

Telecom builds without oversight; we buy, buy, buy. A marriage made in heaven, right?

Certainly, free connectivity with the world is thrilling.

Although it’s an interconnectedness dependent on Wi-Fi hotspots and viewing screens, it’s also transformative metaphor set in motion. Even if the grid were to go down.

There is much to celebrate as we enter times of solar and galactic energies beyond the norm.

Down here on earth in day-to-day living, is WiFi safe?

Savvy consumers, are we, or lab rats in a maze?

The Why-Fry debate is much more heated in Europe. This side of the Atlantic doesn't quite get it yet.


Though in the US, many towers are now camouflaged in flagpoles, cupolas, obelisks, and faux-trees, as the public begins mulling over safety questions.

What we don’t notice, can’t hurt us, right?

For the guffaw of the day, here’s a faux-palm in Kona, Hawaii, necklaced with electronic beamery:


An author friend, Savitri Bess, gets Wi-Fi'd. Here's her account:
All that from Wi-Fi? Come on; sounds absurd.

What if I were to tell you that electromagnetic frequencies (EMF) from your Wi-Fi, and your cell phone, cordless phone, nearby cell tower, and TV’s are sending out gazillions of invisible and mysterious, pin-like frequencies piercing your skin, your brain and nervous system? Waves which impair mental and physical capacities.

EMF symptoms are cumulative. Sneak up on you without your awareness. You begin to feel that an impaired state of being is “normal.” 30% of the world population experiences the symptoms, but don’t realize what’s going on. Only 3%, the “canaries in the coal mine,” feel it in debilitating ways, at this stage of the EMF electromagnetic game.

I turned out to be one of the canaries. I had been known, over the two years I worked in a church office, as a high-functioning secretary, very much on point.

Gradually I found myself confused, unable to alphabetize the church directory, leaving important information out of the Sunday bulletin, and doing off-the-wall typos, like, “In the name of the Father, the Son, and the Holy Boast!”

It turns out that the town where I worked is blanketed with Wi-Fi, sending out 24/7 EMF to everyone, like it or not.

A friend fortunately identified my symptoms; his office used to be right next to an internet cafe. His medical doctor was appalled at his symptoms of impairment, and advised that he move his office out to the country.

I listened to his story, but hoped I could recover from the WiFi-symptom build-up on weekends, which did seem to work for awhile, though my weekends were blotto while recovering.

Over a year’s time, I invested in shielding-antidotes to office EMF and town WiFi. Despite my best efforts, the day came that I simply was too stupefied and headachy to work.

Studies about the dangers of being exposed to EMF have been conducted for years, since in fact the 1930’s. And why has this not been front page news?

Funds for US studies are generally doled out by the Wi-Fi and cell industry, never mind government. An interesting selection process.

Paul Brodeur, in his book The Zapping of America, writes: “During World War II, Soviet scientists had taken complaints of headaches, eye pain, and fatigue on the part of Russian radar workers seriously enough to conduct full-scale investigations of them, whereas in the United States similar complaints had been dismissed as ‘subjective symptoms’…

Yes…the Soviets took serious note, but the USA did not. Why not? The USA made a different sort of decision: Vested interests in war and industry took precedence over the well-being of soldiers and workers.

During the Cold War, Soviets checkmated the US denial about microwave dangers, and beamed EMF into the US Embassy.

When the plot was uncovered, the US, to save face, assured their employees that there was no danger, even after children had come down with leukemia, sixteen women diagnosed with breast cancer, and two ambassadors had died of cancer.

We can guess at the state of efficiency of the rest of the embassy—emotionally volatile, mentally impaired employees in various stages of EMF instability, unable to focus or remember a phone call from a few minutes ago.

Today EMF-based industries are mushrooming, unchecked—cell towers, WiFi antennae; Blue Tooth and cell phones in pockets next to reproductive organs, or stuck to ear next to brain.

It’s rare to find a library without Wi-Fi installed.

Meanwhile, my friend needed an official diagnosis, so she went to her doctor and handed her the World Health Organization’s official description of symptoms of Electromagnetic Hypersensitivity.

Doc examined the list, and said, “A lot of people come in with some of these problems, like hair loss, fatigue, itching, pain in the eyes, dizziness, insomnia, and we can’t figure out what’s wrong. Our tests don’t show anything.”

The one known option we've read about or been told, is to get away from the source; for many, it means moving to the country.

After a few days away from the EMF-emitters, headaches, disorientation, anxiety and other symptoms do subside, however, it may take several months for the brain to feel relatively vibrant again.

Governments have mandated WiFi and cell technology, without the slightest certainty that it is safe. Think of it. Just as the US okay’d the use of DDT, until Rachel Carson blew the whistle, that it was destroying all of nature and ultimately our ability to farm edible produce.

So here we are, most of the population walking around texting or with cell phones velcro'd to our ears, totally unaware of the surround—wind in pines, sound of first robin of spring... Or oncoming traffic.

Without realizing the accruing e-buzz, we lose focus, and feel out of touch, depressed, forgetful, oddly frantic. Vertical but not quite present.


The Obama presidency had expressed a willingness to get science back on track, as a source of independent R&D. This might have meant questions could be asked by scientists without threat of reprisal, for "wrong" answers. Suck it up or get fired has become the norm.


The EU is already questioning ever-increasing electro-smog from cell towers, Wi-Fi and military. Is it safe for living things, humans, bees and cetaceans?

Has the US even posed that question?


European research says, NO, rampant EMF is not safe. It has allegedly caused cancer clusters, loss of well-being, deterioration of mind.

Some researchers are uneasy and wonder if children and teens, so constantly exposed to cell phones, video toys, and now Wi-Fi in schools, may be at risk for... early senility.


US research is funded by industry and military.

How helpful to us are their reports? How much motivation, you figure, for reporting any risk which would imperil their bottom-line and agenda, whatever it may be?

At home at least, WiFi can be turned off at night for sounder sleep. Removing the unit from proximity to a child's room has reportedly brought an end to nightmares.

If well being is bio-electric in nature, it might be a good idea to make time for walks in nature--the city park, going fishing--grounding out discordant e-buzz, without bringing smartphones along?

Techie firms reportedly send employees to remote vacations, there to walk on beaches and find calm, and themselves again.