Cell Phones: If I Only Had A Brain, Cancer Update April 2017 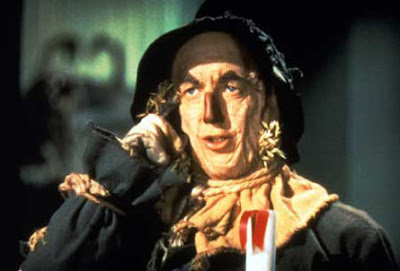 Cell Phones:
If I Only Had a Brain

Breast Anomaly Anecdote
3 April, 2017:
A dear cousin was sent in for breast biopsy this winter, deeply terrified while awaiting the pathologist's report. It was her right breast, and despite having a cuz, moi, articulate about cell-radiation, she'd taken to tucking her cellphone conveniently into the right cup of her bra--while singing in chorus, gardening, cooking. She has asked me to post this warning. A family of geeks, they live in total EMF-surround. Mercifully she did not lose her breast to oncology protocols. But she does not store her cellphone by breast or ovaries anymore.

We are connected; cell phones, towers, satellites. We are the brain-buzz, brain-fry generation and we be billions on the move. Connected to work, to friends, opportunities, news, and what else?

What if, just supposing, cell phone technology were profitably unregulated, with not a peep about health effects over time?

Not regulated? You mean, the US Congress has looked after its re-election coffers, and not the Commons? Well, knock me over with a peachback.

So what’s the big deal? Telecom offers essential life tools and technology, right? And anyway, we don’t do long-term.

Well, cell phones and cell towers and satellites a-beaming make for a big old biological experiment on all life, including us human beans. It’s like Mengele writ large, with Madison Avenue must-have come-hithers thrown in.

Parents are urged by telecom ads to show their devotion, and do the right thing by their kids—provide cell phones in the interest of child safety.

Check out this graphic from a 2003 Swedish study on young rats, age comparable to human teens.

(Note that cell phones are called mobiles in Europe/UK.) 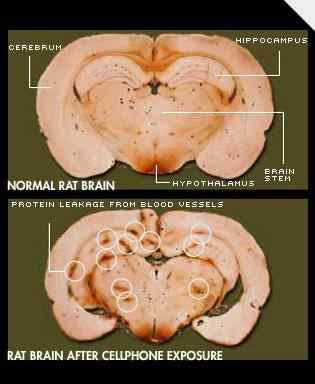 We’re talking not just buzz-brain, but brain damage. And not nursing homes, but the young. Studies are beginning to expose a plague of pediatric brain tumors, which have surpassed even childhood leukemia.

“Do you suffer from any of these common illnesses and ailments, which have all been scientifically linked to cell phone information-carrying radio waves?

So, given the known unknowns in an unregulated industry, what can we do to exercise some personal common sense? If EMF exposure is not actually well-thought-out, not body/mind-friendly, can we limit exposure? (EMF = electromagnetic frequencies.)

Robert O. Becker, MD wrote a warning for us: His book, Cross Currents, suggests we get a clue about EMF-saturation of home and work space. Some of his suggestions are included in a zinger pro-active list by Mike Adams of naturalnews.com:

* Save cell phones for emergencies and use land lines whenever possible. Make sure cell phones are turned off when not in use, and avoid using them inside a car. When you do use cell phones, use appropriate air tubes and shielding devices: see RFSafe.com and LessEMF.com for available products. Keep cell phone chargers unplugged when not in use.

* Do not buy cordless DECT phones, which emit a constant electromagnetic signal even when not in use.

* Unplug electrical appliances when not in use.

* Keep your bedroom free of electrical appliances, especially near your head while you sleep, use a battery-operated alarm clock rather than electric; unplug lamps.

* Remember that walls, floors, and ceilings do not block EMFs when arranging your furniture.

* Replace dimmer switches with regular switches to eliminate high-frequency radiation, or "dirty electricity," that can be hidden in your home's electrical wiring.

* Avoid the use of appliances with variable speed drives, such as fans, heaters, front-loading washing machines and some furnaces.

* Use LCD computers and TV screens and avoid plasma TVs. Keep computer use to a minimum; keep unplugged when not in use.

* (Yeoman research: Minimize time in WiFi’d libraries, hospitals, schools, and now even churches. If you have WiFi at home, for goodness sake, unplug the thing when not in use, especially at night. Parents have reported their children having terrible nightmares, insomnia when WiFi is positioned next to or below child bedrooms.)

* Walk barefoot on the beach or earth, or hug a tree. Wear shoes with a sole made from natural materials – all of this may help you release excess EMFs into the earth and ground your body.

* If you are currently buying or building your own home, make sure you choose a home at least 5 miles from the nearest microwave or cell phone tower, high tension power line, or other radio and TV transmitters.

Big stuff going on here, but there’s plenty we can do. For starters, we can do EMF-shielding in our offices and homes; it helps.

What does that look like? Well, try affordable, cut-to-size screens for PC or laptop; an apron to wear over heart and vitals while sitting at the computer, both from lessemf.com. You get the drift. The solutions are not high-tech, and they’re not expensive. Stress and crummy health are what’s expensive.

Getting our minds around even needing to do this is one big arghhhhh. EMF pollution is like air molecules, everywhere.

But do we have to breathe it?

Our tower/antenna proliferation on schools, homes, offices, churches, mountain tops, and even the sea bed is either vigorous industry in action (the Madison Avenue meme), or unregulated lunacy.

If lunacy, towers, towers everywhere, and Telecom’s sweetheart deal with Potomac-Swamp-Legislators, may yet come under scrutiny.

So, what’ll it be? Step right up—mice in a maze, or informed human beings?

The Swedish Association for the ElectroSensitive, including links to latest developments: http://www.feb.se/index_int.htm

Posted by Yeoman Gardener at 9:14 AM