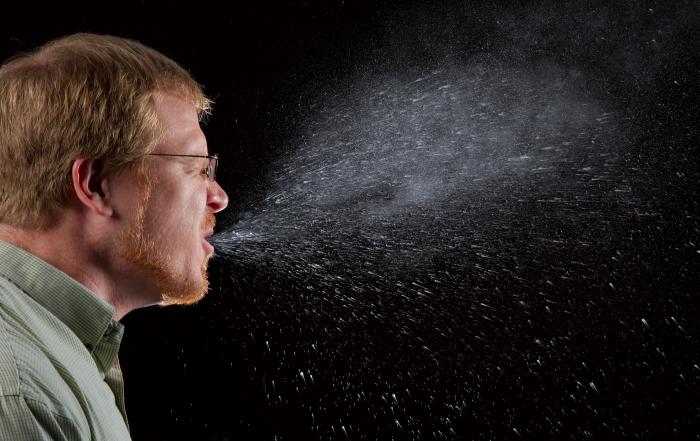 The above pic, its blast of energy, is a Public Health image of sharing a sneeze with one's surround... not a nightscape of the Milky Way!

People still have to work, right? Those post-holiday bargains are shouting, success to first-grabbers, yes?

Such a deal: new i-phone and weeks of nose-blowing, wracking coughs, aching bod. 'Tis the season, and life goes on messily.

But what to do?

The librarians, where I used to read aloud to the kids, taught the munchkins to sneeze into their bent elbows... instead of all over an open book and those sitting across from them. A good start.

How about this? Tuck a folded handkerchief into pocket or turtle neck with a sprinkle of essential oils, a classic might be lemon, lavender & pine.

Travelers' note: The above essential oil solution, to sick passengers and stale recycled air, has protected me and many friends on plane flights, bus or train trips.

Here's a simple meet-the-masses remedy. Clove spice is both anti-viral and anti-bacterial. Tuck a single clove between your lower back molar and inner cheek on both sides. You can still talk, or sip a latte!

There's a reason that camel caravans and odd wooden sailing vessels centuries ago went armed and dangerous. They fought over the Spice Trade, land and sea. Those who could afford the spices, which were schlepped great distances to markets, fared better.

Innkeepers who simmered and baked spiced savouries in their fireplaces could count on loyal clientele, likely healthier.

It was a world of chamber pots and open sewers in the streets dumping into brooks and rivers, and no real understanding of basic hygiene and health.

(Though the CDC might pat BigPharma on the back for that... and its mandatory untested vaccines.)

Destroying safe-water infrastructure could in fact be construed as a war crime. Ditto poisoning of wells, an ancient op, or corporations blithely dumping their effluent.

Centuries ago especially in cities, people knew not to drink disgusting water. Low alcohol "small ale" was even drunk at breakfast. Mulling with spices gave further protection, either with cider, ale or wine.

The fragrance of mulling cider on a woodstove and hot mugs of it, stand as compensatory blessing, coming in wet and freezing from the outdoors. Slow simmering on any heat source will work:

Simmer covered till fragrant. Strain and serve with or without a pat of grassfed organic butter.

In Dickensian Britain, a hot poker from the fire was plunged into a jug of wine already enhanced with powdered spices.

I once happened on a Blue Ridge Mountain winery where a German girl from the Mosel wine country was just arrived and mulling the local red: Use whatever "milk" works for you: organic grassfed whole milk, almond, rice, etc. (Maybe think again re soy milk and its gender-bender phytoestrogens. Ditto re Dutch-process cocoa which is rendered lower in antioxidants.)

Mix dry goodies together and meld into sweetener. It will be thick and lumpy. Gradually add dribbles of water till smooth and shiny in consistency.

Whisk in hot milk, first a little. Serve deliciously as is, or top with Schlag (whipped cream.)

3) Garlic is a very good idea, potent in antimicrobial effect. Enjoy it in stir fry, garlicky Mediterranean dishes, hot & sour soup, and the old standby, chicken soup, with lots of garlic and onion. 3a) Note: Some holistic cardiologists prescribe garlic for heart and circulation health; it does function as  a blood thinner. If you're taking prescribed blood thinner meds, check first with your physician.

5) Follow this link to a recipe for a medicinal vinegar from the lethal Black Plague time of the Middle Ages. "Thieves Vinegar" is still formulated by pharmacists in France. It's surprisingly effective: http://feastandfamine.blogspot.com/2008/07/preparedness-in-interesting-times.html

6) Elixirs of elderberry and/or garlic: http://feastandfamine.blogspot.com/2009/11/garlic-elderberry-for-oink-flu-blues.html

As a side note, vitamin companies offer capsule extracts of the above spices as anti-inflammatories and immune-boosters. One can do that, assuming availablity. We can also steward health at home.