Power of Symbols, Symbols of Power

Power of Symbols
(Gov-logos removed, not by the author.)

The above astonishing logo is not a parody. The NRO  (National Reconnaissance Office), not known for its sense of humor, chose a control-freak emblem of its spy satellite as global-octopus.

This, after earlier logos of We-Own-the-Night, and the NROC as Father-God:

Are they clueless?!! has been asked.

Possibly, but it may be a matter of smugness. If spy masters have the goods on politicians, bureaucrats, corporations and everybody, who can rein them in?

The economy may. As underlings are pink-slipped, they may go out the door with more than wounded pride and fear of the future. They may turn whistle blower.

In the early days of its founding, America's spies gathered data via horseback, carriages and sailing ship. Slow, but relentless, and the octopus image predates the NRO.

A controversial American president, Andrew Jackson, fought the efforts of the Bank of England to regain control of the wealth of the lost British Colonies. He fought an earlier iteration of the so-called Federal Reserve.

Slaying the Leviathan of a central bank: 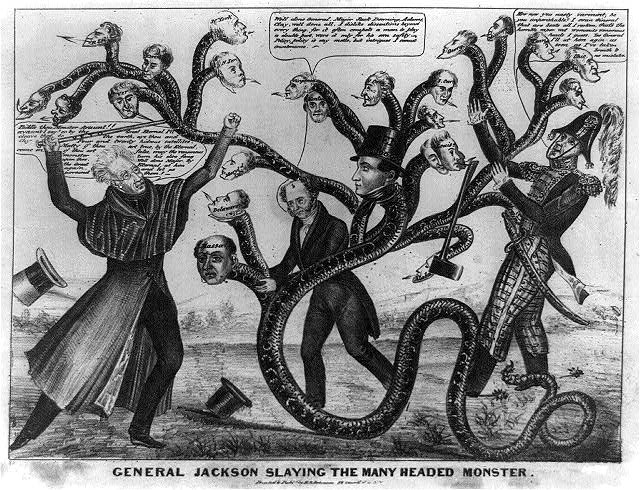 Jackson was responsible for genocide in the infamous Trail of Tears, but he did defeat The Bank, for awhile.

The US dollar bill with its all-seeing eye and other Masonic symbols has been gutted by the current central bank, the Fed, approaching the value of Confederate war bonds. And may soon lose all pretense of world reserve currency.

Symbols are used to inspire fear, awe and allegiance. Symbols, abused, can lose their power---even the patriotic fervor of national flags, when waved to impose lies.

That can be a torturous journey of cannon-fodder sons and daughters hurled into the maw of war-profiteering, and spit back out as maimed, PTSD'd and homeless. Or dead.

The Nobel Peace Prize has made a mockery of itself, awarding big bucks and global acclaim to sociopaths and mass murderers.

Universities have awarded honorary degrees to CEO's, busily firing workers and offshoring jobs, and to banksters, who destroy livelihoods, municipalities and pensions.

Oh, the shark has pretty teeth, dear
And he shows 'em, pearly white...

The structures of society are undergoing, slo-mo for now, greed-implosions, called "recovery" by media shills.

You won't hear much about it on the nightly news, but we also live in a time of truth-tellers who expose Potemkin Village façades.

Speaking the truth can end whistle blower careers. It can also end life: small plane crashes, questionable suicides, heart attacks and car crashes. Those not offed may be tortured and jailed, or forced to live in exile.

Yet there are those with integrity who still risk taking action.

Case in point: While Cyprus, the prototype, was implementing theft of depositor savings, to reimburse banksters for their own over-reach, Iceland begged to differ.

Iceland stood on the battlements and announced: Bank Fraud. Iceland repudiated fraud-debt and has brought banksters to trial. And is throwing them in the slammer.

Which brings us back to spy masters having the goods on politicians, bureaucrats, corporations and everybody. The US has declared its rapine & plunder banks "too big too fail." (aka, too big to jail.)

They must be rescued with bail-outs, poor dears. Economy-wrecking trillions have poured into that orifice.

Yesterday, I stopped to talk to a woman standing on a street corner holding a piece of cardboard which read, "Anything will help." She'd lost her job to downsizing; benefits have run out; she's sleeping rough and hungry.

Symbols mean nothing to her now.

Monarchy once meant elegance, absolute power and military might. Till the Bastille was stormed by hungry mobs, and the guillotine ended an era, and its particular symbols.


How will current smirking and tyranny end?

Will  communities of people here and worldwide ever see US perp-walks of fraudsters? Orange jumpsuits as the new chic?

This being Martin Luther King day, am remembering a stunning black diva, a woman of substantial presence and glorious voice who sent chills through global audiences.

At the French Bicentennial celebrating the storming of the Bastille, Jessye Norman's voluminous gown evoked the French flag, the tricolor, as she sang The Marseillaise. Here is that telecast:
http://entreetoblackparis.blogspot.com/2011/07/remembrance-of-bastille-day-with-jessye.html


Classic movie buffs will recall "Casablanca" and the singing of The Marseillaise to defy Nazi occupation and the collaboration of Vichy France. 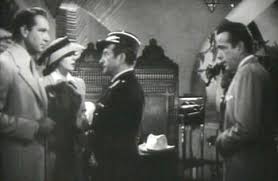